We learned a lot more about our ancient relatives in 2020 — other species of humans that existed before and, in some cases, alongside early Homo sapiens in the centuries and millennia before we emerged as the lone hominin survivor.
The oldest skull belonging to Homo erectus, the earliest humans to have body proportions similar to Homo sapiens and known for migrating out of Africa, was found in pieces in the Drimolen archaeological site just outside Johannesburg. It belonged to a young child, only about 2 or 3 years old, and was dated to between 1.95 and 2.04 million years ago. Until this discovery, the oldest erectus fossil came from Dmanisi, Georgia, and was dated to 1.8 million years ago.
A piece of late Stone Age chewing gum also yielded an extraordinary story.
Geneticists were able to sequence the genome and oral microbiome of the last person to chew the birch pitch — a girl who lived 5,700 years ago in what’s now Denmark. Scientists were able to deduce what she had for her last meal and that she couldn’t stomach dairy. It was the first time human genetic material had successfully been extracted from something besides human bones. 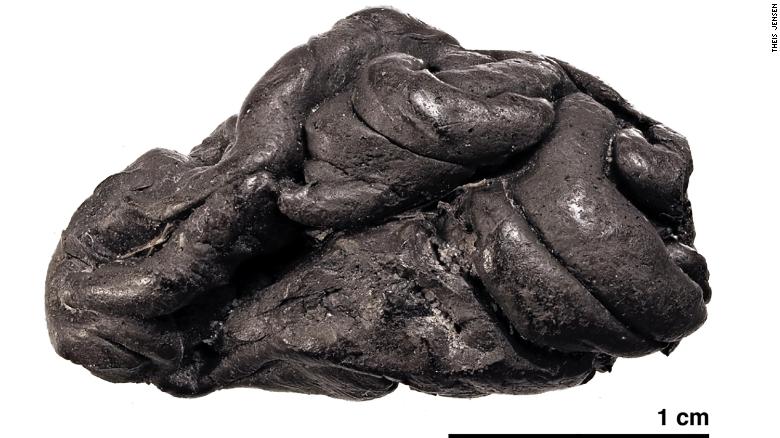 Shown here is a piece of birch pitch from Syltholm, southern Denmark.

A tiny piece of cord from a French cave further undermined the idea that Neanderthals were cognitively inferior to Homo sapiens. The discovery of a 41,000 to 52,000-year-old yarn fragment wrapped around a thin stone tool showed that Neanderthals had an understanding of basic math concepts needed to make the yarn and suggested that it was possible Neanderthals could manufacture bags, mats, nets, fabric, baskets, snares and even watercraft.
“It opens a new window on the cognition of Neanderthals and their ability to organize their way of life,” said Marie-Hélène Moncel, who is a director of research at the French National Centre for Scientific Research.
Finally, take a minute to marvel at the oldest rock art created by humans.
It was found in Indonesia and depicts a hunting scene that experts say changes our view of early human cognition. Science labeled its discovery a runner-up for its breakthrough of the year, saying it decisively unseats Europe as the first place where modern humans are known to have created figurative art.
“If the figures do depict mythical human-animal hunters, their creators may have already passed an important cognitive milestone: the ability to imagine beings that do not exist,” the magazine said. 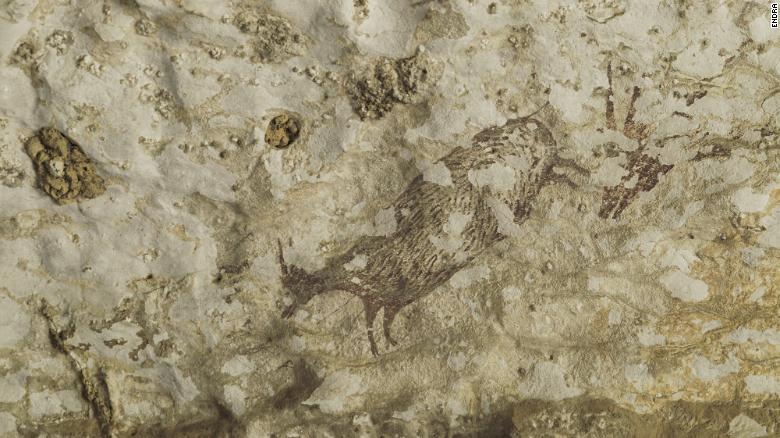 The art in this Sulawesi cave is thought to depict half-animal, half-human hybrids.

Dinosaur bellies and evidence of their diets are rarely preserved in the fossil record. The last meal eaten by an armored nodosaur just before it died, however, was captured in exquisite detail, according to a study of a unique fossil published in June.
This discovery gave definitive evidence of what a large herbivorous dinosaur ate — in this case, a lot of chewed-up fern leaves, some stems and twigs. The details of the plants were so well preserved in the stomach that they could be compared to samples taken from modern plants today. 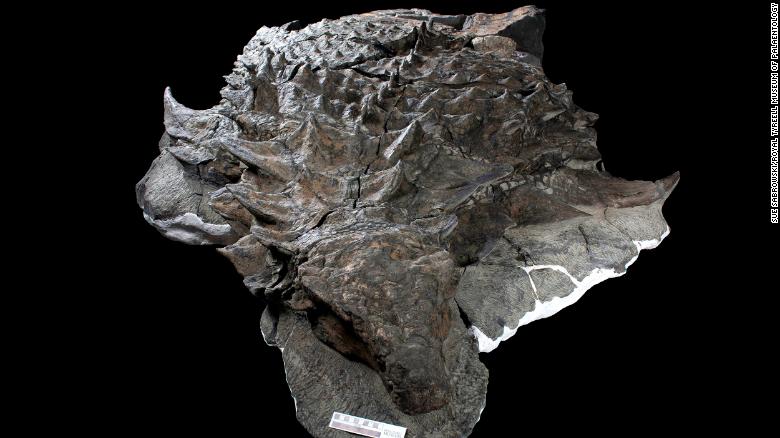 The fossil of the nodosaur is incredibly well preserved.

Around the time dinosaurs went extinct, an unusual mammal lived in the Southern Hemisphere. Its extremely bizarre features have perplexed paleontologists. Dubbed “crazy beast,” the discovery of Adalatherium was announced in the journal Nature in April. The oddball animal, the size of an opossum, has more vertebrae than most other mammals, muscular hind limbs that were in a sprawling position similar to modern crocodiles, coupled with brawny sprinting front legs that were tucked underneath the body. Its front teeth were like a rabbit and back teeth completely unlike those of any other known mammal, living or extinct.
“Knowing what we know about the skeletal anatomy of all living and extinct mammals, it is difficult to imagine that a mammal like Adalatherium could have evolved; it bends and even breaks a lot of rules,” said David Krause, senior curator of vertebrate paleontology at the Denver Museum of Nature & Science in a December statement to mark the publication of a 234-page monograph on the animal by the Society of Vertebrate Paleontology — a yearly publication on the most significant vertebrate fossils. 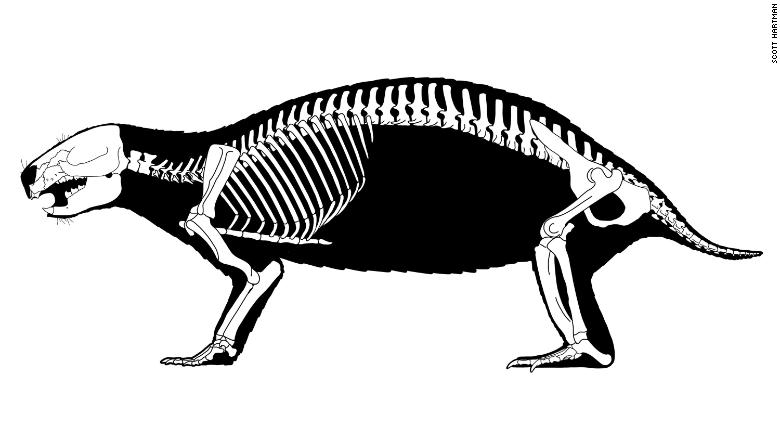 This depicts the reconstructed skeleton of Adalatherium hui, aka crazy beast, a newly discovered mammal from the Late Cretaceous period of Madagascar.

Going back far beyond dinosaur times to the origins of life, scientists discovered evidence of the oldest ancestor on the family tree that includes humans and most animals — a wormlike creature about the size of a grain of rice that was uncovered in South Australia.
The creature lived 555 million years ago and were an evolutionary step forward for early life on Earth.

The author is a long-term contract author of rich-daily.com, has lived in the United States for a long time, and has a wide range of hobbies